Flexing our Photoshop muscles from a distance 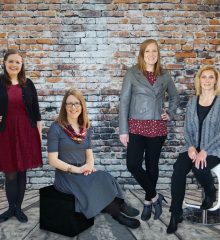 When Lexie Thomas purchased the Write Place almost one year ago, we knew we needed to update our staff photo. It had been three years since our last group photo (yikes!)—so it was high time for a new one.

We had a challenge many businesses are facing right now: distance and different office locations. But thanks to some creative planning and Photoshop work, we were able to come up with a new team photo in time for our new owner announcement. We thought we’d share our process from last year with you because right now, outside the box thinking is something we’re all being asked to do every day.

Our game plan was pretty simple:

Sounds cut-and-dry, right? Well … as often happens during this time of social distancing and stay-at-home orders, things didn’t go quite as planned. So we did something else we’re good at—working with what we have and creating the best possible product.

When you’re trying to Photoshop two (or more) different images into one, consistent lighting is very helpful. Our plan was to have both office locations take their photos outside on cloudy days. (Bonus photography tip: clouds provide naturally diffused light!) But weather is unpredictable, and it threw a few wrenches in our plan: wind in Pella, snow in Minnesota, and bright sun when it was forecasted to be cloudy.

Team Pella did take their photo outside, but it was much sunnier than expected and a bit windy. As you’ll see below, we had to grab dictionaries from the office to keep the backdrop from blowing away! The bright sunlight made it hard to get even lighting.

Team Lakeville tried taking their photo outside, but it was also windy and sunnier than predicted, plus they still had snow on the ground. So, they went inside and used a big window for natural lighting. Since it was sunny, by going inside they were able to get lighting that was much more even and consistent.

But we ended up with photos that had very different lighting. What to do? 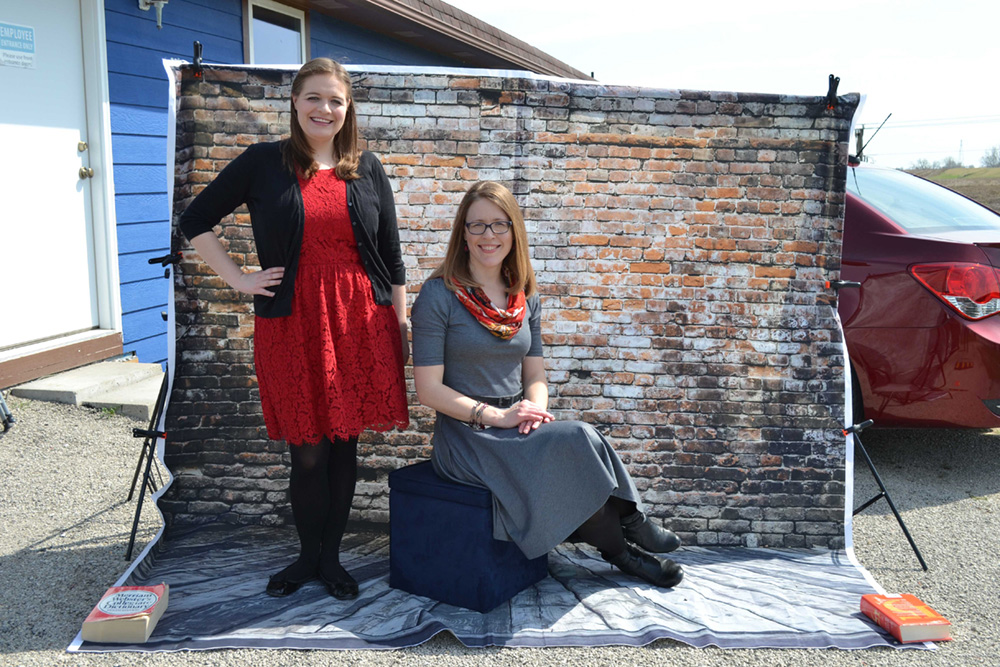 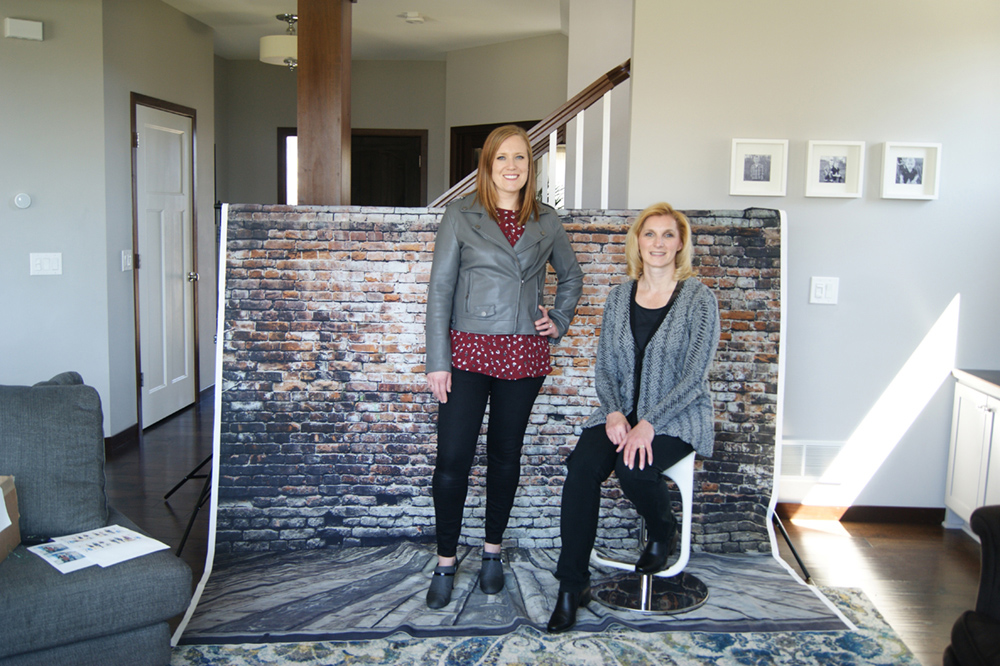 Instead of Photoshopping the middle of the two images together as planned, we decided to cut out all four of us and position us on a photo of the backdrop. (Think paper dolls.) That way, it was easier to adjust the lighting for each individual and I (as the Photoshopper) didn’t have to extend the height of the backdrop (as you can see, it wasn’t tall enough for the gals who were standing), or make the floor of the two photos match up.

We decided to make some other changes as well. You’ll notice Lexie’s legs are different than the original photo. That’s because we liked the way she was standing better in another photo, so I swapped out her legs. The stool I am sitting on is navy blue, but with a quick adjustment, I made it black to coordinate with our color scheme. The color of my scarf and Sarah’s dress were also deepened to match Lexie’s blouse.

Are there things in this photo someone with an expert eye might notice? Yep! The floorboards and bricks are scaled larger than the actual backdrop (especially on the Facebook cover version), but making that concession saved significant Photoshop time. 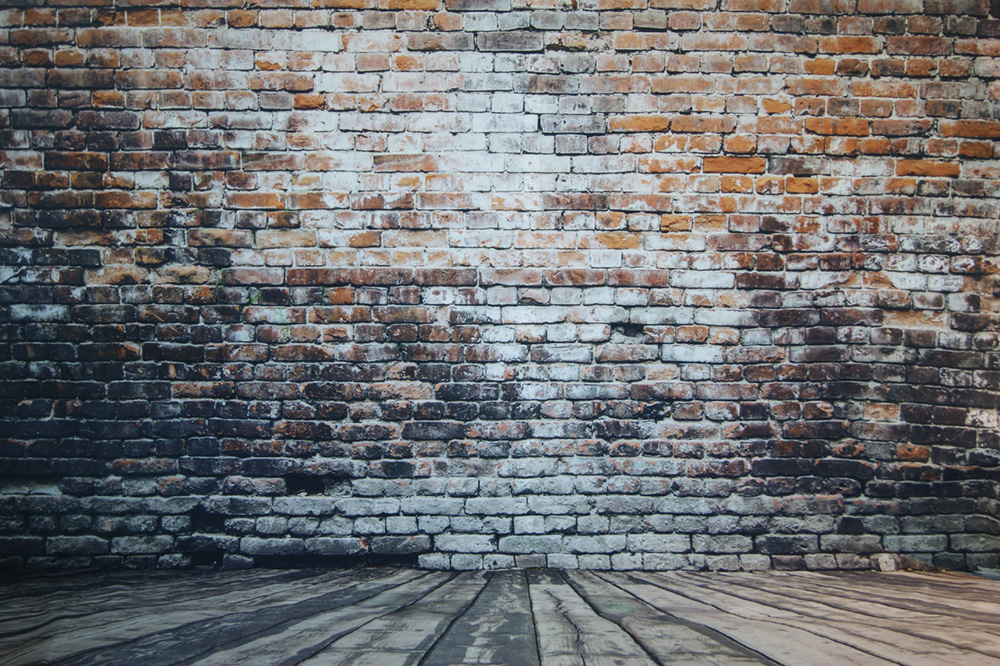 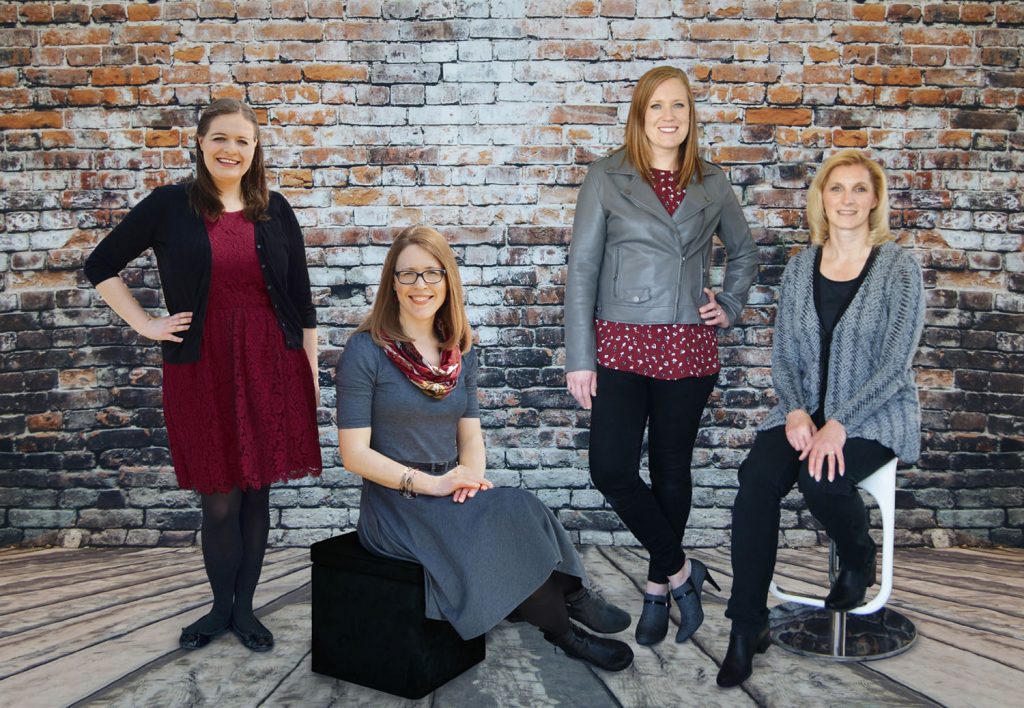 If you are in a similar spot and need people or products combined into a single image, let us know! You might be surprised what we can create for you.

Things to think about for your staff photo shoot
Coordinating outfits
Aim for similar outfit styles, patterns that make sense together, and colors that complement each other
Considering the style of furniture
A shabby-chic stool paired with a stainless-steel chair may read as disjointed rather than eclectic.
Looking online for poses you like
Traditional staff photo poses could end up looking more formal than your company culture.