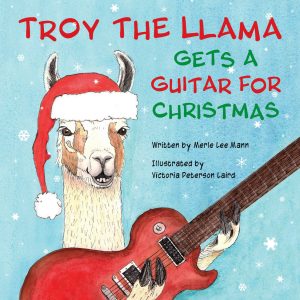 Spring flowers may be blooming outside, but Oskaloosa author Merle Lee Mann is bringing a touch of wintry magic to readers with his newly released children’s book, Troy the Llama Gets a Guitar for Christmas.

The story begins just a few days before the holiday. A young llama named Troy is excited to decorate the barn and bake cookies with his friends and family, all the while dreaming of the guitar he hopes Santa Claus will bring him.

Mann knows llamas well—he and his wife, Tami, raise them on their farm, Luminary Minis. But the author’s animals aren’t his only inspiration.

“Tami and I have seven children. They came to us through the foster care system and have been adopted as our children,” explained Mann. “I’ve wanted to write children’s books for over 40 years. Finally, I decided to write stories about my kids, because I believe they have stories that need to be told and shared. This book is based on one of my son Troy’s best Christmases.”

Troy’s heartwarming tale is accompanied by whimsical illustrations from noted wildlife artist Victoria Peterson Laird, also of Oskaloosa. The design of each character is based on a real llama living at Luminary Minis.

“I’m so excited to share this book and these illustrations with readers!” concluded Mann.

On June 4, readers will have the opportunity to meet Mann and his llamas during the Luminary Minis Farm Tour. Copies of the book will be on sale at the event, which will take place from 9:00 a.m. to 2:00 p.m. at 2605 Luminary Lane in Oskaloosa. Troy the Llama Gets a Guitar for Christmas is also available for purchase online at Amazon and BarnesandNoble.com.

Troy the Llama Gets a Guitar for Christmas was published through the Write Place. It is Mann’s first book and the first in a planned series.