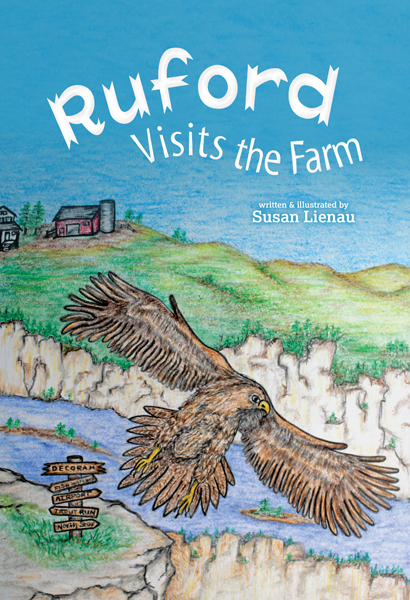 In 2011, the bald eagles of Decorah became an internet sensation when researchers at the Raptor Research Project began live streaming footage from a webcam installed near their nest. Seven years later, millions of viewers around the world still tune in each spring to watch “Mom” and “Dad” care for a new nest of eaglets. And now, these Iowa celebrities are vividly characterized in a new children’s book written and illustrated by Iowa native Susan Lienau.

Ruford Visits the Farm—published by the Write Place this fall—tells the story of a four-month-old eaglet who leaves the nest for his very first solo flight. While soaring over the bluffs and farmland surrounding Decorah, Ruford spots a red barn. His curiosity draws him to North Star Farm, where he makes friends with the resident animals and Farmer Randy. At the end of the day, Ruford flies home to tell Mama and Papa Eagle all about his adventures.

“I’ve read a lot of children’s books to my own children and grandchildren,” said Lienau. “I thought, I would love to do that someday. In 2017, I sat down and started writing a story.”

From the beginning, she knew the story would be about some kind of animal that traveled and went on adventures. But it was her grandson who suggested the hero be a bird. So Lienau—who lives near Decorah—started weaving a tale about a young bald eagle.

“I left the manuscript alone for a few months after I finished writing,” said Lienau. “In 2018, it was my New Year’s resolution to illustrate the book. It took me about four months to get everything drawn. I put the illustrations with the story and decided I liked it enough I wanted to get it published. And that’s how I ended up at the Write Place!”

With help from the Write Place’s team of editors, graphic designers, and publishing consultants, Lienau was able to realize her dream of publishing Ruford Visits the Farm in September 2018. “I’m hoping that by writing this book I’ve inspired others who have always had a dream to go after it,” she said. “You’re never too old to do what you love!”

Lienau will host book signings at the Cozy Cottage Guesthouse in Decorah on November 17 and 18. The Saturday event will be from 10:00 a.m. to 5:00 p.m., while the Sunday event will be from 12:00 to 4:00 p.m. Copies of Ruford Visits the Farm will be on sale at the signings. The book is also available for purchase on Amazon and BarnesandNoble.com.

Susan Lienau has resided in Ossian, Iowa, for the past 35 years. She and her husband, Ronald, have four grown sons and three grandsons. They own and operate Bambinos Bar and Restaurant. She is also co-owner of Cozy Cottage Guesthouse. Ruford Visits the Farm is the first book in a planned trilogy.