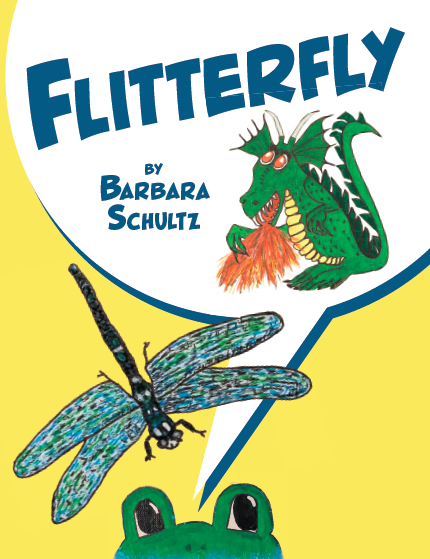 Flitterfly, written and illustrated by Barbara Schultz of Rose Hill, Iowa, is the latest children’s book published by the Write Place. It tells the story of Flitterfly, a dragonfly who lives on the land surrounding Schultz Pond. Over the course of a few sunny summer days, the adventurous and curious Flitterfly becomes friends with her neighbors—the animals, insects, and amphibians who also live on Mr. and Mrs. Schultz’s land.

Publishing Flitterfly is a dream Schultz has been working toward for a long time. “I’d thought about writing a children’s book for several years, but I’d never found the time to sit down and do it,” said Schultz. “That is, until I learned about the Write Place Book Contest.”

Every two years, the Write Place invites authors to submit manuscripts of all genres to its contest. When Schultz came across an advertisement for the 2016 Book Contest, she felt inspired. Drawing inspiration from her own backyard—as well as the area in Tama where she and her husband enjoy camping—she began writing about the inquisitive Flitterfly and her friends. “For years I’ve loved to draw and take photographs,” said Schultz. “So I started putting together a collection of illustrations and photographs to go with the story.”

Schultz entered Flitterfly into the 2016 Book Contest—and was selected as a contest finalist. “I was so thrilled when I was told Flitterfly was a finalist,” remembered Schultz. “It just goes to show you’re never too old to write a book!

“My hope is that readers will gain a new appreciation for Iowa’s wildlife as they read Flitterfly,” she continued. “Especially the dragonflies.”

Barbara Schultz was born and raised in Muscatine, Iowa. She is the mother of two children and grandmother of four. Schultz worked for Muscatine School Food Service for 30 years and also served as the mayor of Rose Hill.

Flitterfly is available for purchase on Amazon and BarnesandNoble.com, and at the Eagle’s Nest Christian Book Store in Oskaloosa.