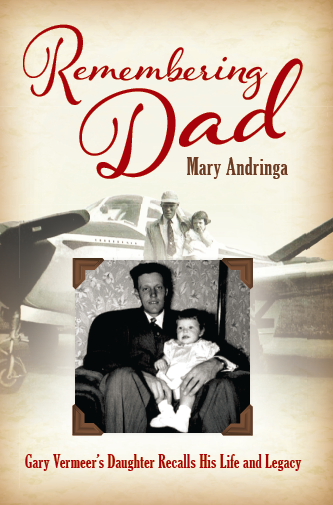 In 2008, the Write Place published In Search of a Better Way: The Lives and Legacies of Gary and Matilda Vermeer in celebration of Vermeer Corporation’s sixtieth anniversary. Now, almost 10 years later, Gary and Matilda’s daughter and former Vermeer CEO Mary Andringa has partnered with the Write Place to publish a companion history: Remembering Dad: Gary Vermeer’s Daughter Recalls His Life and Legacy.

“I was first inspired to write about my dad by the questions I was getting from family members and Vermeer customers about his life and how he started the company,” said Andringa, who currently holds the position of Chair of the Board at Vermeer Corporation. “But I was also inspired by the upcoming one-hundredth anniversary of his birth. This birthday is a significant time to reflect on his life, and I thought sharing my memories of him would be a neat way to celebrate my dad.”

Andringa began recording her own memories of her father 18 months ago. As the book began to take shape, she branched out and started gathering stories about him from relatives, friends, employees, and business associates. “Interviewing a variety of people and learning new stories about my dad was the best part of writing this book,” said Andringa. “There were so many stories I didn’t know. I knew he had been a youth leader, but I didn’t realize the impact he had on young people. The former members of his youth group had a great deal of respect for him.”

In Remembering Dad, Andringa weaves these and other stories together with her own memories to paint a warm and vivid portrait of a loving father, an exacting engineer, a dedicated servant leader, a man of faith, and much more.

“He was a complicated man,” said Andringa. “I know a book can never do justice to a life, and I keep thinking of other stories and pictures I could have included. But there comes a time when you have to declare a manuscript complete!

“In the end, there is so much in my father’s life, and especially his leadership style, that can be emulated today,” she continued. “I hope readers of Remembering Dad are as inspired by my father’s story as I was while I wrote it.”

Remembering Dad: Gary Vermeer’s Daughter Recalls His Life and Legacy is available for purchase at Amazon and BarnesandNoble.com.

Mary Andringa began her career as an elementary school teacher. She received a Bachelor of Arts from Calvin College in Grand Rapids, Mich., and taught in both Iowa City and Omaha. In 1982, Andringa began working in market research at Vermeer Corporation. She has filled a variety of roles at Vermeer, including president, COO, and co-CEO. She was named president and sole CEO in 2009, a position she held until 2015 when she transitioned into the role of Chair of the Board. She has been married to her husband, Dale, for over 45 years. They have two children and six grandchildren. Remembering Dad is her first book.