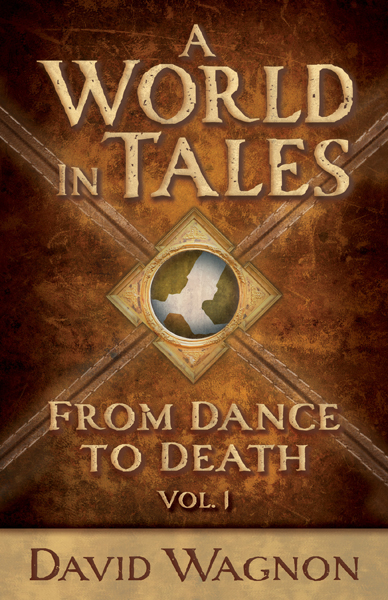 A World in Tales: From Dance to Death, Volume 1 by David Wagnon is the latest e-book published by the Write Place. Set in the magical land of Longferrow, Wagnon’s fantasy adventure—told in three parts by three very different narrators—takes readers on a journey full of courage, sacrifice, and a dash of whimsy.

A World in Tales begins with the story of Prince Reginald, a 12-year-old boy who loves to dance in a kingdom where dancing and music are strictly forbidden. Reginald’s adventure is followed by the tale of Peter, a man bent on having a good day despite work, a case of the flu, and a mild head injury. Finally, the book closes with the story of John, a little boy who becomes friends with a rodent of royal lineage and finds himself caught up in an age-old quest.

Wagnon first got the idea for A World in Tales while writing dialog for a video game. “The game’s tone was very grim, and my funny bone decided to throw a bit of a revolt,” said Wagnon. “I wrote ‘The Tale of Larry’ [Reginald’s story] as a non-sequitur—something players could find while exploring the world of the game.”

Shortly after, the game fell through, but Wagnon decided to carry on with the story. “It was then I began to focus on A World in Tales, writing more and more of it until it became my lead project,” he explained. “I see the whole event as God-lead. It humbles me that one little tale has grown into an entire series.”

Wagnon plans to publish a second volume of A World in Tales that will link the stories of Longferrow to tales from neighboring lands. “Every new story will take a closer look at each character’s nation, and the stakes will continue to get higher,” said Wagnon.

A World in Tales: From Dance to Death, Volume 1 is available for purchase online at Amazon and BarnesandNoble.com.

Wagnon earned a Bachelor of Arts in English from the University of Arkansas in Little Rock and has been developing characters and storylines for the past 10 years. A World in Tales is his first series. He currently lives in the Gulfport area of coastal Mississippi.